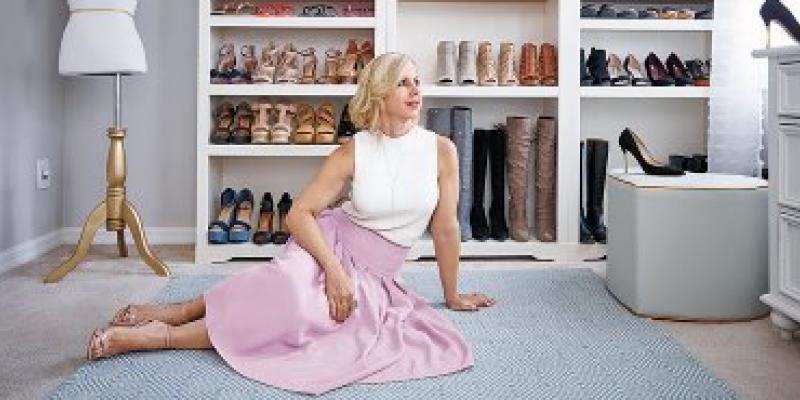 "A Mile in Her Shoes"

Taking challenges in stride, Tonya Walker unites her passion for shoes with Parkinson’s advocacy, raising impressive funds along the way.

Tonya Walker’s closet is filled with more than 120 pairs of shoes: sandals, pumps, slings, platforms, stilettos, wedges and more.  But for years—because of the effects of Parkinson’s disease—she couldn’t wear them.  For Walker, losing her ability to wear fashionable, sexy high heels was an intolerable side effect, and one that she was not going to accept without a fight.

In 2006, she began experiencing symptoms of Parkinson’s.  She was only 32.  After the birth of her son, Walker’s symptoms worsened.  Soon balance became an issue, as her feet cramped with dystonia, and rigidity  set in during her “off” times.  For years she took her medication and chose to keep her diagnosis a secret from all but her closest family and friends.  She left her law practice and took a job as a law professor.  Reluctantly, she retired her stylish stilettos.  Depressed, she thought she’d be relegated to sensible flats for the rest of her life— but she did something about it.

In 2013, before the first of two deep brain stimulation (DBS) procedures, Walker was relatively quiet about her diagnosis.  Fortunately, the procedures were successful, and they brought the worst of her symptoms in check: She regained her balance—and her ability to wear heels.

In 2014, ready to face her condition publicly with her heels on and head up, she stepped into the national spotlight.  With encouragement and tech support from her husband, Chad, Walker launched The Shoe Maven, a dynamic blog that embraced her passion for fashion and provided a platform for her Parkinson’s advocacy.  Even from the home page, it’s clear her site is about far more than fashionable footwear.  “If I have lived this way, how many other people are living in denial?” Walker asks.  “I don’t want other people to be held captive by this disease.  I believe dramatic strides can be made to change public perception through the power of social media.”

Of course, it’s no small feat (pardon the pun) to balance her roles of wife and mom and law professor, all while maintaining a social media network, launching The Shoe Maven (TSM) Originals T-shirt line and organizing Parkinson’s advocacy events.  This year, for example, she presented The Art of Fashion fundraiser held at the Orlando Museum of Art and teamed up with the Michael J. Fox Foundation to launch a social media awareness campaign called Heels On, Head Up.  Since 2014, Walker and her husband have raised close to $20,000 for Parkinson’s research.  By meeting Parkinson’s head on, Walker finds that she’s empowering herself while helping others.

“I’ve met some of the most amazing people I know through advocacy and fundraising,” she says.  “I hope I can make a difference.  I want people who are diagnosed to know they are not alone.”