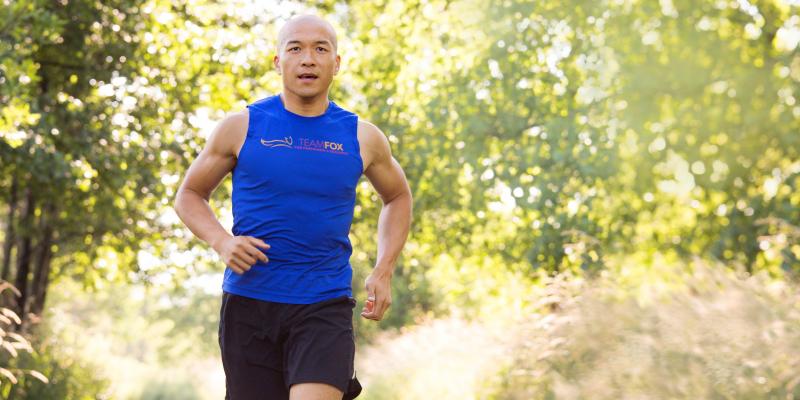 More than 14 years after his diagnosis, Jimmy Choi is proof that taking action is the best defense against Parkinson’s.

More than 14 years after his diagnosis, Jimmy Choi is proof that taking action is the best defense against Parkinson’s.

Swinging from a rope high above a pool of water, Jimmy Choi, age 41, prays that his grip will hold. His biceps tremble as he digs deep for strength. But the obstacles he faces on this popular fitness competition TV show are nothing compared with the big hurdle that life presented him 14 years ago: Parkinson’s disease (PD).  Choi first attributed his minor twitches, stiffness and balance issues to muscle overuse on the golf course. He was only 27 years old when a routine insurance physical led to a diagnosis of early-onset PD. In those first months he kept the news to himself, not even telling his wife, Cherryl. “We had just gotten married, and our careers were just starting,” Choi says.” I thought if I just took the medication everything would be fine.”

Eight years later, things weren’t fine. His PD progressed until he couldn’t walk without a cane. Inactivity caused substantial weight gain, which further compromised his mobility and balance. After a fall down the stairs with his infant son, he finally accepted that he needed to take a more active role in his health.  Choi threw himself into research, determined to find a cure. He was amazed by the number of clinical trials being conducted and saw an opportunity to contribute. “I felt that the best way to fight back was to give my body to science,” he says. “I signed up for as many clinical trials as I qualified for.”  One of the trials required physical therapy. After the workouts, Choi noticed that his body responded better to his Parkinson’s medication. He also trimmed down and built muscle. In 2012, he decided to run his first 5K. He was hooked.  “I felt great after running,” he says. “I had more control of my off periods. In September, when I crossed the finish line at my first half marathon, I decided to run my first marathon.”  But there was one slight problem: The Chicago Marathon was less than a month away. “I thought he was crazy,” Cherryl says. “But I encouraged him, because when he started running, his outlook and the way he lived day to day changed. He had a positive mindset.”  Choi joined Team Fox, the fundraising initiative at the Michael J. Fox Foundation, to help him register for the already closed Chicago Marathon. This resulted in two positive outcomes: He became more public about his PD, and the team provided a much-needed support network. “Team Fox has become a second family for us,” Cherryl says. “They just know how to help.”

Over the past five years, Jimmy Choi has run 13 marathons (including several Chicago and New York City Marathons); 90 half marathons; countless 5Ks, 10Ks and Gran Fondos (over-100-mile bike competitions); and an ultra marathon. All told, he’s raised more than $100,000 for Parkinson’s research.  Choi’s dedication to exercise and advocacy inspires people with and without PD. But his 10 year old daughter, Karina, who is an obstacle course champion at the local gym, inspired his latest accomplishment. At her insistence, he applied to be a contestant on a popular network television competition and was selected.  With only six weeks before the airdate, Choi’s rigorous workouts became even more intense. A combination of cross training, distance running and cycling, and obstacle course training helped him prepare. Karina did too. “She became my barbell,” Choi says with a grin. “I did overhead lifts, pull ups and push ups with her on my back.”  When Jimmy Choi appeared on the show in July, the entire family was there, cheering him on. At home, millions of viewers, including his Team Fox family, watched on the edge of their seats as Choi competed. Although he didn’t win, his victory was far greater: He changed perceptions for millions of viewers about what it means to have PD. “It’s important to stay positive and keep moving,” he says. “You never know who you’re going to inspire.”