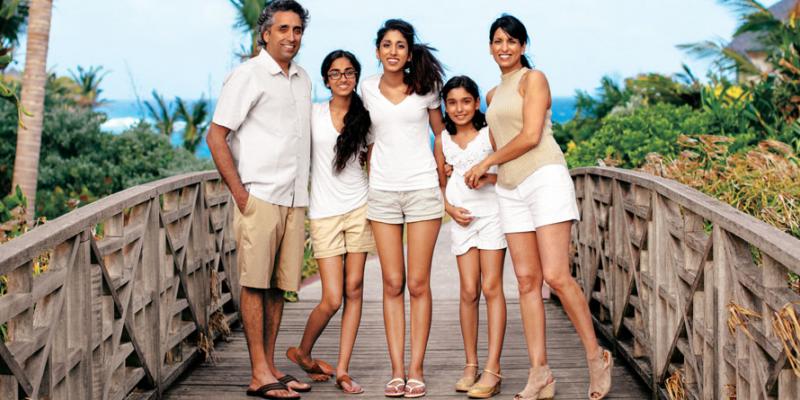 Parkinson’s wasn’t part of Soania Mathur’s parenting plan, but talking to her kids about her diagnosis helped make her a stronger mom.

Soania Mathur, M.D., was 27, pregnant with her first child and working as a family physician when she learned that she had young onset Parkinson’s disease. “All of a sudden a happy occasion was marred because of this diagnosis,” says Mathur, explaining that the news rocked her expectations for motherhood. “I knew it was an incurable, progressive illness,” shesays.

At first she simply denied it, hiding her tremors from friends, colleagues and patients in her practice outside of Toronto. Avoidance was easy back then because her symptoms were sporadic and didn’t warrant medication yet. She weathered her first pregnancy without drugs. Her eldest daughter, Sarika, was born healthy and without complications. But then Mathur and her husband Arun had two more daughters, Neha and Meeraya, and each pregnancy was more difficult. “My symptoms got worse, and I couldn’t take any medication because I didn’t know what effect it might have on my unborn babies.”

As the girls grew older, Mathur began to manage her symptoms with meds but still avoided the subject of PD. Having a strong, supportive husband helped her maintain a sense of normalcy at home: Although a surgeon with his own busy practice, Arun got up at night with the girls as babies, took them on playdates as toddlers, and later shuttled them between home and school, whenever Mathur’s tremors were particularly bad. Meanwhile, the girls didn’t ask why Mom’s handtrembled sometimes and caused her to color outside the lines or splash bright nail polish over the edges of their tiny fingertips. “I’m addicted to my girls. I always wanted to be involved in all aspects of their lives.”

Then, Mathur’s habit of waiting for meds to mask her symptoms before leaving the house started interfering with her ability to enjoy her children. Daily life was all about trying to juggle medications, symptoms and her daughters’ needs. “We’d run late to social events or to school. It all became very logistical. Timing was everything,” she says. “Because I hadn’t come to terms with my diagnosis and only focused on what the disease was taking away, I was becoming someone who couldn’t laugh as readily and wasn’t enjoying life with my children.”

After 10 years of hiding her diagnosis, Mathur decided it was time to own it, to take control of how she faced the challenges of PD. She decided to open up to the girls by providing them with basic facts about her condition—give it a name. One evening, after returning home from a fundraiser, the Mathurs asked their daughters if they knew why the family attended Parkinson’s events. The couple saw it as a good time to ease into the PD conversation without scaring the girls. The reply they got from eight-year-old Neha surprised them: “Because you have Parkinson’s,” she said.

Mathur’s fear of burdening them with her diagnosis melted away. Theyalready knew. What’s more, they wanted to help, and decided that night to donate part of their allowances to Parkinson’s research, so that their mom “wouldn’t have to have Parkinson’s anymore.”

“It was an eye-opener. They intuitively knew, but we had never discussed it,” Mathur says. “What I thought would be stressful, suddenly became a beautiful lesson.”

A Lesson in Acceptance

In fact, being open with her children helped Mathur to be more honest with herself. She made a series of big decisions. First, she retired from practicing medicine to focus on volunteering with several PD organizations, including the World Parkinson Coalition and the Brian Grant Foundation. Then, she began writing about living with Parkinson’s for mainstream news websites. She has even published two children’s books on PD. The second, Shaky Hands: A Kid’s Guide to Parkinson’s Disease, perhaps is the most special because her daughters helped her write it.

“As infuriating as this disease is at times, it has taught me to face each day with a sense of gratitude and optimism,” says Mathur. What has her struggle taught her children? “That life will have challenges. But it is how you face them that’s important.”

Tips for Talking to Kids About PD

1.            Be honest. Hide the truth, and they may create a story that’s much scarier. Besides, kids are intuitive and probably already know something’sup.

2.            Express hope. Children are naturally positive and compassionate. This is an opportunity for them to express that. Help them to look for the silver lining.

3.            Keep the facts simple and easy to understand. Consider their ages and maturity before sharing too much. Mathur’s first book, My Grandpa’s Shaky Hands, is ideal if you have preschoolers.

4.            Let them help. Give them specific tasks, such as programming your phone with medical reminders, helping you with minor chores around the house, or getting involved in fundraising.