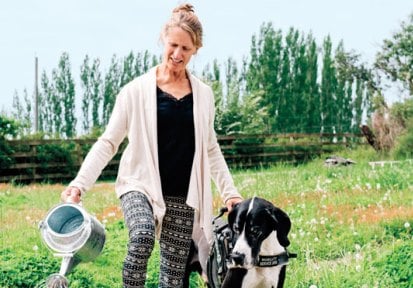 "The Divine Power of Dogs"

Simply owning a dog is linked to better health. For Renée Le Verrier, diagnosed with PD 11 years ago, the impact was miraculous.

Wet noses and thumping tails aren’t the only reasons to love dogs.  Researchers associate canine companionship with lower blood pressure, higher rates of exercise and an improved rate of recovery from heart attacks.  There’s even evidence that simply petting a dog helps chase away the blues.

If you think the challenges of Parkinson’s disease mean that you can’t enjoy these benefits, reconsider.  We found that some dogs are being trained as not only companions, but also as helpers for people living with PD.

For Renée Le Verrier, a yoga instructor diagnosed with PD at age 43, getting one of these special service dogs (also called balance dogs) brought her much more than help to stand, walk and work independently.  “He’s part of my family,” she says of Sir Thomas, a 140-pound, mantle Great Dane.  “Tommy brings joy to my life.”

Le Verrier applied for and met Tommy four years ago on a 12-acre farm in Ipswich, Mass., that is home to Service Dog Project, Inc. (SDP).  The nonprofit trains all of its gentle giants to assist people with movement disorders.  SDP founder Carlene White, whose father also had Parkinson’s, has raised more than 110 Great Danes to work as balance dogs for people with movement disorders such as cerebral palsy and multiple sclerosis, as well as PD.

With Tommy by her side, Le Verrier moves through her daily routine without the fear of being stuck or experiencing a fall.  When her gait freezes, on command the Great Dane steps forward and gently tugs her along.  “The most common thing he’ll do is brace,” she says.  “He plants his paws, and when I shift my weight to his, it frees my foot to move.  He also steadies my gait when my meds haven’t kicked in yet,” she adds.  One unexpected perk is the reaction the pair get from passersby who focus warm attention on them rather than stare at Le Verrier’s symptoms.  “He gets noticed more than a cane and has much more personality.”

Like all SDP pups, Tommy began training when he was three weeks old to provide the special bracing support and prompting behavior that help Le Verrier.  He can also help her step up from a parking lot onto the curb, assistance that is the difference between feeling stuck and getting on with her day.  Thanks to the pet she nicknamed her “Great Dane Cane,” Le Verrier—a busy wife, mom, artist and the author of several books on PD—has continued to work as a yoga instructor.  Tommy even accompanies her to the yoga studio and waits patiently on his mat until her classes are over.  (She likes to joke that he helps with the instruction by modeling the perfect downward-facing dog pose.)  “I can be more independent, because he’s there if I freeze or lose my balance,” Le Verrier says.

Of course, there are days when roles are reversed, and Le Verrier becomes a typical dog owner taking Tommy to the vet or on an emergency nighttime walk because he ate something that upset his stomach.  She finds the extra responsibility fulfilling, a fair trade-off for all that he does for her.  “Just knowing he’s around givesme confidence,” she says.  “I’ve been in my studio cleaning up after class and found my legs won’t work.  He gets me out of those situations.  Whatever happens, we’ll figure it out together.”