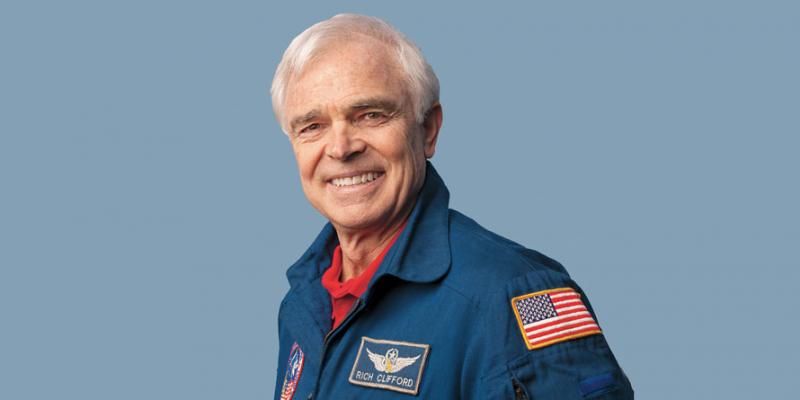 During the summer of 1969, Michael “Rich” Clifford was a studious 16-year-old. He watched with the rest of the world as Neil Armstrong took “one small step for man, one giant leap for mankind.” Like so many young Americans, he decided in that instant that he would become an astronaut. Unlike most, Clifford found himself on board the space shuttle Discovery 24 years later.

That first mission led to a second, then a third. In 1994, at age 42, Clifford logged more than 250 hours underwater in NASA’s tank to prepare for his first walk in space. The flight surgeon cleared him for flight. But before he left the exam room Clifford casually mentioned that his racquetball game was off. “The doctor asked me to walk down the hall, and he noticed my right arm wasn’t swinging.” He was sent to a neurologist, who confirmed the flight surgeon’s suspicions. Clifford had Parkinson’s disease.

The diagnosis threw him for a loop, pitching him into depression and denial. He thought he’d never fly again. But his NASA commander had other ideas, and left the decision up to him. “I told them I want to keep flying. They said, ‘You’re fully qualified now. So as long as you stay qualified, you’ll fly again.’”

The officials at NASA didn’t insist Clifford keep his diagnosis a secret, but he opted not to tell the rest of the flight team. “I felt if they knew I had the disease they’d look at me differently,” he says. The 44-year-old astronaut completed his mission aboard the Atlantis, including a six-hour space walk. The world had no idea that this marked one giant step for a man diagnosed with Parkinson’s.

In 1997, Clifford hung up his space suit. He accepted a position with Boeing Defense and Space Group. After retiring, he began to share his diagnosis. Clifford’s wife, Nancy, supported his decision to go public. “Throughout his career he’s always been on the edge,” she says. “Rich is a positive person, and we try to stay positive.”

Today Clifford gets his air miles jetting to speaking engagements, where he advocates for Parkinson’s awareness and research. Nancy notes  how much they both benefit from talking with other families living with Parkinson’s. “We learn from others and compare notes,” she says.

Together, the Cliffords have embraced their mission to live well with Parkinson’s. Clifford takes time to speak directly to family support teams. “We wouldn’t be anywhere without our caregivers,” he says. “Sometimes I get frustrated. Nancy keeps me focused.”

Since his space-walking days his condition has progressed. He experiences tremors on his right side and jerking head movements. Insomnia and an impaired sense of smell are his most common non-motor symptoms. To stay in top form, he gets plenty of rest and exercise, grabbing 18 holes on the golf course as often as possible.

Through it all, the same spirit of determination that motivated Clifford to become an astronaut keeps him going today. “You have to be persistent,” he says. “Parkinson’s doesn’t have to change your life.”